N.B. to turn the pages either use the left and right arrow keys or
peel the page you would like to turn from either corner. 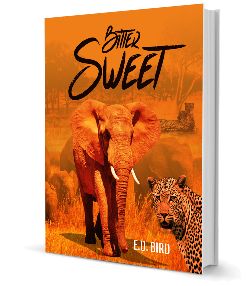 What is the cost of truth?
Hilton Shire, a newly appointed private investigator, embarks on a quest for revenge. He enlists the help of his brothers-in-law, Jordan and Kyle to establish how Sabrina, Hilton’s wife, and sister to Jordan and Kyle, was involved in an inexplicable car accident which appears to be as a result of her investigation into the demise of Julie Curl’s husband a number of years before. They believe that Sabrina, a private investigator at the time, was drawing close to resolving the mystery when she met with unmitigated violence.

The case unfurls to something more sinister and complex as the investigators find themselves taken as far away as Barbados and into dangerous situations they never thought possible.

With wild animals and evil men to contend with, Hilton, Jordan and Kyle must surge forward through both man and beast to bring justice to those responsible for a great many deaths.

Will Hilton get to the bottom of the mystery and avenge his wife before more killings take place?

In this brilliantly orchestrated novel, E.D. Bird takes readers on a relentless cat and mouse chase across the unforgettable southern African nations and Barbados. The unfolding adventure is menacing, perilous, intriguing and, in the end, it could possibly be Bitter Sweet…

Loved this book. A good plot that keeps you interested right to the very end. It has plenty of interesting characters and lots of action. It would make a good film!
The link for this review is http://www.amazon.com/dp/1517695732​​

By Juli-Anne B.
Format: Paperback

Really enjoyed the book. Waiting patiently for your next novel to be released!
The link for this review is http://www.amazon.com/review/R26SE8V19WSOR3

Set in southern Africa, Bitter Sweet lives up to its name, at times violent and tragic but ultimately full of hope.

Against the lawless backdrop of the gold mines, wilderness, and corrupt estates of southern Africa, E. D. Bird spins a tale of justice and just desserts in Bitter Sweet, as the grieving survivors of a horrific con attempt to apprehend missing kingpins in an effort to put the past to rest.

When the duplicitous but lucrative and far-reaching company Goldenviron, under the direction of Bobby McGarvie, is exposed for stripping its richest gold mine and disposing of dissenting shareholders in a gruesome manner, an investigation is launched. This forces McGarvie and his henchmen to flee, but not before many lives are lost.

Seeking closure, a group of surviving family members, led by private investigator Hilton Shire and backed by the police force’s Detective Chief Inspector Samson Ndlovu, attempt to track down the remaining criminals in an international search. Characters trek from the wilds of Africa to the beaches of Barbados where being shot at, blown up, and attacked by wild animals are all legitimate concerns.

Set in an unnamed third-world country somewhere in southern Africa, Bitter Sweet is packed with phrases, vocabulary, customs, and occurrences particular to that region of the world. From kopjes to elephants to casual discussions of the leopard’s amazing ability to drag a downed wildebeest (or an overweight man) high into a tree for safekeeping, Bird, who currently resides in Zimbabwe, shows an intimate knowledge of African life.

After an extremely detailed and complex yet brief prologue, Bitter Sweet picks up after the events of the gold mine tragedy, which feels like a complete story in and of itself, with the opening chapters serving as act two. Short, action-filled chapters revolve around three threads that eventually meet at the end. There’s the investigative team led by Shire and Ndlovu; the alias-loving criminals, including executioners Mike Sanchez and Edmond Braun; and the victims Chester and Tabatha, who find themselves unwillingly tangled once again in the evil of Goldenviron’s underworld.

Bitter Sweet lives up to its name, at times violent and tragic but ultimately full of hope.​

The deaths of loved ones perpetrated by men from a crooked multinational company prompts family members to exact revenge in this fast-paced mystery.

Julie then hires Sabrina's husband, who, along with Julie's two brothers begins connecting the dots leading them to the ruthless perpetrators. Tensions and danger rise as their friend Chester (a previous Goldenviron employee) and his girlfriend, Tabatha, are kidnapped and their lives threatened. Mayhem ensues after the search group travels from South Africa to Barbados while in pursuit.
E.D. Bird's action-packed book is at its best in detailing gruesome torture scenes and danger in a game park when a raging bull elephant charges after Tabatha while she and Chester make their escape. "The elephant was crashing through the trees like a monster; they were no match for his great size, weight and strength. Branches as thick as his thigh were snapping like twigs as the animal bulldozed his way through the Mopani trees."

The bloodshed starts a year after Bobby McGarvie, the largest shareholder in a southern African mining company, finishes “raping and pillaging” its richest gold mine. Author Bird provides plenty of details about the investors who were suspicious of Bobby McGarvie: They were sent to an AIDS clinic, where they were overdosed with drugs and eventually burned in a mine incinerator. The director of that clinic is one of several people hiding out until they’re sure the heat has died down. But the heat is rekindled with a vengeance when Hilton Shire is hired by Julie Curl, the wealthy widow of a mine investor, to find out who murdered her husband. Shire is actually the second PI to investigate; the first was his wife, Sabrina. The story detours into a game park, where a former employee of Goldenviron is being tortured. Meanwhile, his innocent girlfriend is suffering a predictable fate elsewhere, and their subsequent escape only puts them in the path of a hysterical bull elephant. Meanwhile, Shire’s investigation leads other psychopaths involved in McGarvie’s original scheme—not to mention former South African police officer Sgt. Mostert, now acting as a bodyguard—to Barbados, where another of the criminals resides in tropical luxury. Realistic dialogue and engaging descriptions of exotic places lend an air of believability. ​

A feast of suspense and slaughter for fans of Reservoir Dogs–style violence.